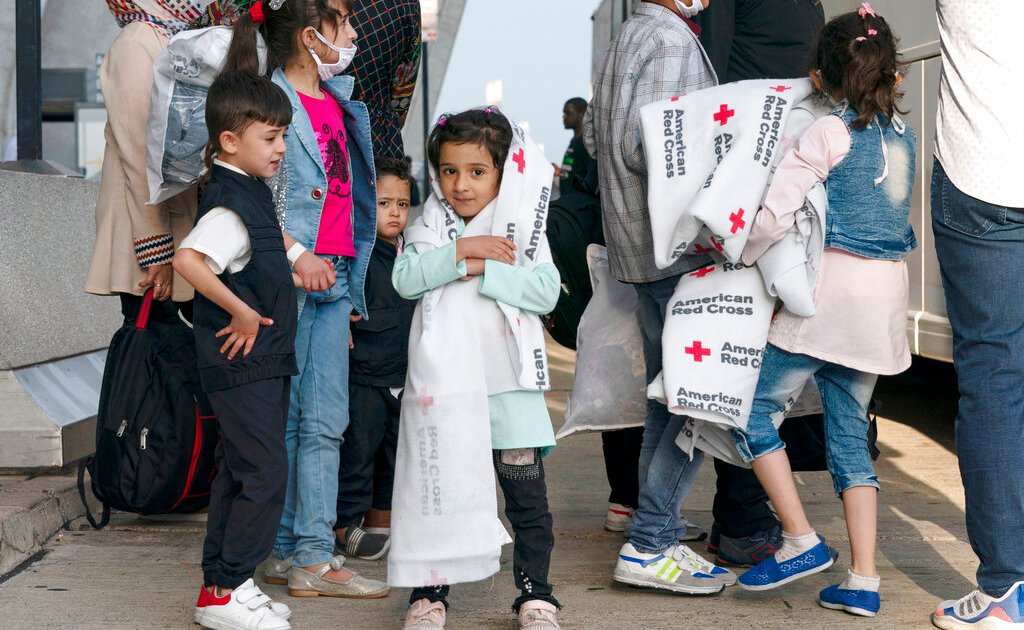 Fort McCoy military base, Wisconsin, US – Ahmadzai* had imagined the birth of his first child as a typical Afghan family affair with relatives visiting his home in Kabul to deliver embroidered baby clothes and other gifts and recite the Quran to celebrate.

But Ahmadzai’s first child was delivered at a hospital in Wisconsin and then brought back to Fort McCoy military base, where his family and thousands of other Afghan refugees are awaiting immigration processing after being evacuated from Afghanistan amid the Taliban takeover.

Ahmadzai, 25, like other parents of newborns at Fort McCoy, said welcoming a new baby at the camp is bittersweet.

He expressed gratitude for the safety and opportunity that his new setting offers; he also lamented missing out on the rituals and shared joy of the extended family that come with the birth of a new child in Afghanistan.

Ahmadzai’s new son, Yasir, is one of more than 250 babies born to Afghan evacuees on military bases in the US since American troops withdrew from Afghanistan at the end of August, according to the US army.

“Families of newborns receive necessities such as formula, diapers, wipes and clothes from a variety of both governmental and nongovernmental organizations,” a spokesperson for the United States Northern Command (USNORTHCOM) of the military told Al Jazeera in an email.

At Fort McCoy, families ask the US army for anything else they might need. The Red Cross is also active on the base to provide humanitarian support.

Ahmadzai, who had worked on an American military base in Afghanistan, said he had no choice but to flee his country when the Taliban took control of the capital Kabul in mid-August as US and NATO troops withdrew.

Now he and his family live in one of the two-storey barracks housing thousands of Afghans at Fort McCoy. Each family hangs Red Cross-provided curtains and blankets to create private space inside of the buildings.

About 30 people live on each floor. Families are allocated a space for beds and a small area to socialize and eat.

“We are happy that our boy was born safe and sound, but we are also disappointed that we are in a foreign country right now,” Ahmadzai said.

The family also gathers for recitation of the Quran in full known as “Khatm ul Quran” on the sixth night of the child’s life.

In the US, Ahmadzai’s family mostly received verbal congratulations from fellow evacuees in their building.

“Everyone’s situation is the same here – what we wear and eat here, everyone does the same, so no complaints,” he said.

Another baby, Mohammad, was born on November 2. Abad, his father, said he is thankful for the medical care his wife received during and after her pregnancy.

Mohammad is the family’s third child; they have two daughters aged 5 and 3.

“I am so happy that my son was born as a US citizen,” Abad told Al Jazeera. “As he grows up, he will be in a mixed community of Afghans and Americans, which will be great for him.”

He said he is looking forward to organising a ceremony and inviting Afghan and American neighbours for a celebratory meal once he is formally settled in the US.

“It would have been hard for my son to study well and become a successful person in Afghanistan because of the fighting and destruction there,” Abad said. “They have very good institutions for education here and my son will have access to them.”

Originally from Afghanistan’s eastern Khost province, Abad said he will try to teach Afghan culture and customs to his children.

“I think my son is very lucky to be born here; we were born and raised in war, and we have seen bloodshed in our country through all our lives, so he is lucky to be born in a peaceful country,” he said.

While Abad and his family consider themselves fortunate, the chaotic US withdrawal left behind many Afghans who worked with American forces. The rapid Taliban advance on Kabul in August spurred a huge evacuation operation to help US citizens, allies and third-party nationals leave the country.

While the US administration says it helped airlift more than 124,000 from Kabul between the Taliban takeover and the departure of the last American soldier from the country, the operation was plagued by violence and disorder.

Footage showed Afghans hanging on to departing aeroplanes from the Kabul airport in the day after the Taliban captured the city. A suicide bomber in the crowd of people at one of the airport gates killed at least 175 people on August 25, including 13 US service members.

At least three babies were born during the evacuation. One Afghan woman gave birth in the cargo hold of a C-17 plane on an evacuation flight, and two others at the US military base in Ramstein, Germany. US State Department rules mean none of the three are automatic US citizens because the plane and the overseas base are not considered US soil.

One Afghan family brought to the US during the operation still has not found its infant after passing the then-2-month-old to US forces during the tumult at the Kabul airport.

Immigration advocates have criticised Washington for failing to speed up the processing of Special Immigrant Visas for US allies after deciding to pull its forces from the country.

Back at Fort McCoy, families say they are relieved to be in the US.

Safi, an Afghan evacuee who had worked with US forces, is expecting a newborn daughter in two months. He said he and his wife are delighted that their child will be born in a more peaceful environment than they had experienced growing up.

“Look at it this way, I have worked with American forces for many years, then waited for four years to get Special Immigrant Visas but finally got evacuated in a very bad situation,” Safi told Al Jazeera. “But my daughter will automatically become a US citizen when she is born.”

The expected baby will be the second daughter and fourth child in Safi’s family.

“I have always dreamed of a peaceful and free country to live in, where my children can study and build their lives,” he said. “Now that dream of mine has come true by coming to America.”

*All the interviewees are identified by pseudonyms or first names due to safety concerns.