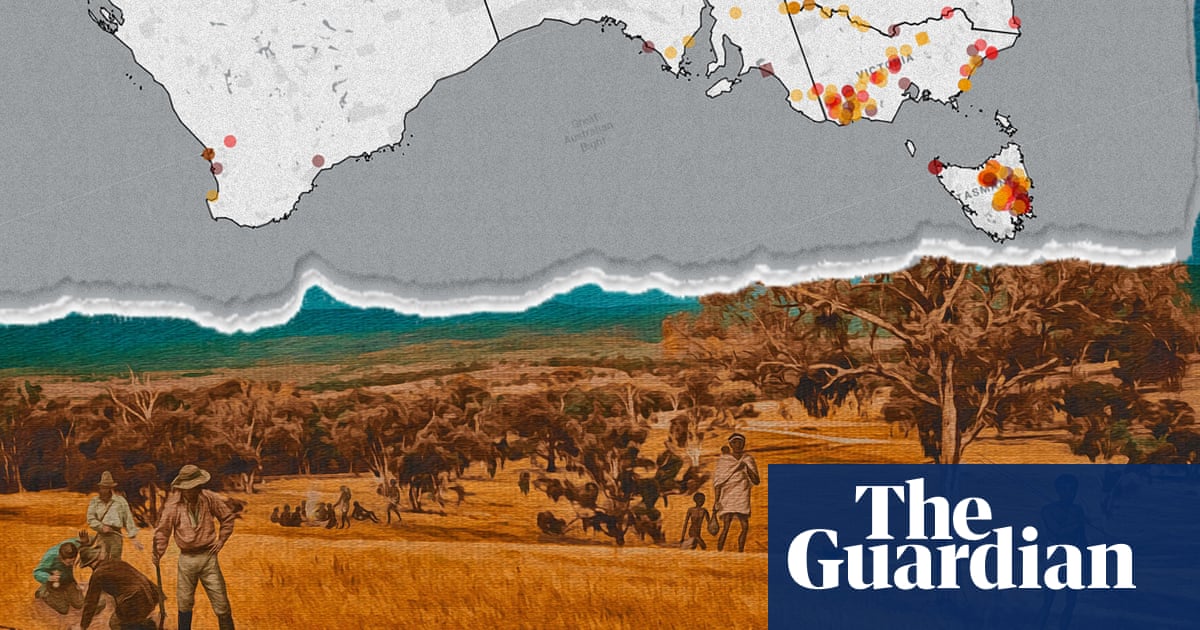 Australia’s frontier history is still being pieced together, errors are still being corrected and new information is coming to light, according to emeritus professor of history Lyndall Ryan and her research team at the University of Newcastle’s massacre map project.

Nowhere is this more apparent than in western Victoria, where Ryan says the “mass of dots” denoting massacre sites has remained, despite researchers correcting locations and even removing some sites from the map.

These updates, amendments and corrections are reflected in Guardian Australia’s Killing Times map. In the latest update, one new site has been added. Researchers also corrected the coordinates and renamed other sites, while 23 others have revised narratives.

Five sites in western Victoria have been removed, and two in the Northern Territory, either due to inconclusive evidence, disputed accounts or because the evidence is being reassessed.

“Western Victoria, in particular, could be labelled a killing field because of the [number of] massacres that are recorded there,” Ryan says. “Certainly there’s more than 30 of them that took place, largely over a 10 year period, and really destroyed much of Aboriginal life in that area.”

A site is only removed after a rigorous process of verification, according to Bill Pascoe, lead researcher and digital humanities specialist at the University of Newcastle.

“I would never want to understate the importance of every individual incident, and that’s why we do take it very seriously to add or remove anything that shouldn’t be on the map. Because obviously it’s the most important thing for the people it [affects] directly and their descendants, and the people who live there who want to know what happened in the place they live.

Amendments and corrections are usually made when each new stage of the map is released. Covid-19 border closures and lockdowns interrupted that schedule. Stage three of the map was released in November 2019 “which seems like 100 years ago now”, Ryan says.

“Covid has certainly impacted on the preparation of stage four,” she says. “What we’ve done in this long period of stage three is made some special upgrades, and that’s what we’re doing at the moment, because information has accumulated.”

Ryan says it can take a week or more to retrieve archival documents, and lockdowns and border closures have made travel to interstate libraries impossible.

Colonial newspapers are an important source. Ryan says time and time again she found a “code of silence” among perpetrators in the immediate aftermath of a mass killing, but it was common for them to talk to journalists long afterwards – as if the “need to tell” had “weighed heavily” on them in the intervening years.

Massacres were often covered up in the immediate aftermath by perpetrators who destroyed physical evidence, Pascoe says.

“There are usually few witnesses, and the code of silence that Lyndall alluded to is usually involved. And even if you know someone’s not necessarily bound by a code of silence with their fellow perpetrators, there’s a reluctance to talk about this sort of thing.”

Making corrections to a digital map is time consuming for both academic and technical reasons, Pascoe says. The research team welcomes community input and feedback, especially from local and regional historians and families of descendants.

“For some time now we’ve been operating on a part-time casual basis with volunteers. And because it is a national-scale project, a big project with a lot of logistical challenges to our resources, we’ve always welcomed feedback and contributions from the community, and we’ve got a feedback form for that [on the site]. That actually helps us out quite a lot when people can point out issues with the website, or any new information they found.”

Stage four of the project is now due in coming months and is likely to be the last. The team expects to add dozens more sites to the map, particularly in Western Australia and the Northern Territory. But the process of truth-telling never ends, Ryan says. She hopes other historians will continue to work towards a more complete history of the frontier in Australia.