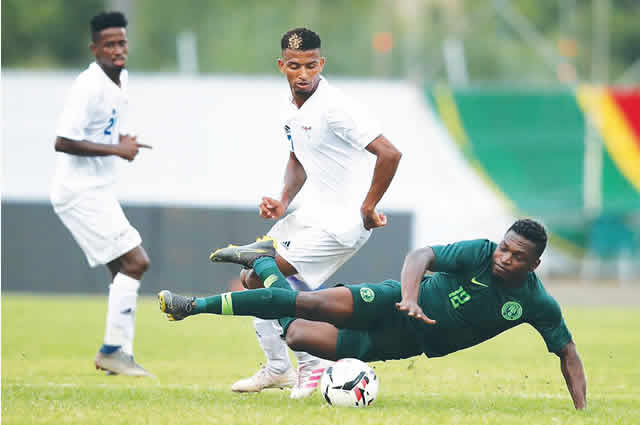 As the make or mar Qatar 2022 World Cup qualifier between Nigeria and Cape Verde inches nearer, fans have expressed fear over the team’s poor home record.

The three-time African champions host the Blue Sharks in the final Group C game of the qualifiers at the Teslim Balogun Stadium, Lagos on Tuesday (today).

A draw will be enough to secure their progress through to the next round of the qualifiers but a defeat will see the Blue Sharks advance to the playoffs from Group C.

The Eagles only defeat during the qualifiers was against the Central African Republic in Lagos.

Gernot Rohr’s only defeats in any qualifying games have all been at home, a record that has fans gripped with fear.

Meanwhile, Cape Verde last defeat in the qualifying series was a 2-1 defeat to Nigeria in September and they since posted three successive victories and are yet to lose any of their away game since the start of the World Cup qualifiers.

Speaking with The PUNCH, Wole Popoola, a tech engineer, said he was concerned ahead of the game in Lagos.

“I don’t know why I am seriously worried and afraid to watch the game against Cape Verde. We lost our last game and a repeat of that could spell doom for the team.

“I really want the team to go to the next phase but I don’t have confidence in this coach and I guess that’s why I am afraid.”

Daniel Ebhodaghe added, “A lot of people seems not to know much about this Cape Verde side, they re very determined and focus. I just realised that they have not lost any away game in this qualifier and that is a big concern.

“I must admit that I see a repeat of what happened in the game against CAR where they will just sit back and hit us when it is going to really hurt.”

“There is no doubt that we are blessed with a lot of quality players but my concern is that they have not been able to play as a team,” Ethan Ajegunma said.

“The game against Liberia was a testament to this because we didn’t play very well despite the victory. I am worried heading into this game and I am not sure if I will be able to watch it.”

Funke Akintoroye, a student said not qualifying for the World Cup would be a disaster for the country.

“The team is not convincing at all and I am not sure if we can get the job done. I cannot go through what I went through the last we played at home to Central African Republic and that’s why I may not be at the stadium to watch the game but I will pray for them to qualify for the next round because failure to do so will be a big disaster for the country.”,,