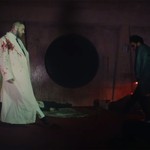 Soon after, Malone chimes in, saying, “Said you wanna have my babies, I f—ed you so good you should pay me/ Don’t call me ‘baby’ when you did me so wrong.”

Post Malone then picks up a rifle of his own and proceeds to shoot several Weeknd doppelgangers along his path, until he meets his archnemesis face to face.

Spoiler alert: In the end, The Weeknd and Malone fatally shoot each other simultaneously.

In addition to the new music video, Malone released a limited-edition “One Right Now” merchandise collection, available for purchase online.

See the new “One Right Now” music video, directed by Tanu Muino and starring the Billboard Hot 100-topping duo of The Weeknd and Post Malone, below: