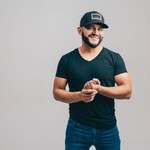 A law enforcement officer-turned-country singer, Ray followed “Streetlights” with “Country’d Look Good On You,” a fresh take on a timeworn tale of a country boy set on bringing an uptown girl into his world. The track — penned by Cole Taylor, Derek George, Monty Criswell and Taylor Phillips — sits at No. 39 on Billboard‘s Country Airplay chart.

Ray, Billboard‘s November Rookie of the Month, revealed to Billboard what drew him to record “Country’d Look Good on You,” and discussed the first album he ever bought and his favorite holiday tradition.

“Country’d Look Good On You” is rising up the country charts. What do you recall about first hearing this song, and why did it resonate with you?

The lyrics are rooted in the country music imagery that we know and love but the vibe is pretty sultry. It’s not like anything I’ve ever heard. Someone best described it to me as “It’s as though Luther Vandross sang ‘Big Green Tractor'” and honestly that analogy is giving me way too much credit but the I love that so much! That song is very much my style and the writers knew that about me so it didn’t take long for that song to find its way to me.

You are in the studio working on new music. How do you feel you are evolving as an artist with your new music?

Making new music is always a blast. But this album is going to be different because I’ve really come into my own unique style. It’s also my major label debut album and in some fashion it’s the album that introduces me into the mainstream country world. It couldn’t have come at a better time because I’m confident in every single song we’ve crafted or chosen. Aside from a great friendship, my publisher and producer, Frank Rogers, and I have developed a great musical relationship. He knows me and understands what I want this body of work to sound like. We’re swinging for the fences right out the gate with this one!

You previously worked in law enforcement before pursuing music full-time. What was the turning point for you, that made you realize you could make a career as an artist?

Working in law enforcement for a decade of my life was difficult to step away from. I was invested. But it wasn’t my life’s passion and everybody knew that. I honestly didn’t know I could make a good living playing music because I had never tried. I’m a terrible businessman. I also didn’t want to try it because my youngest daughter was only three months old at the time. I needed the steady paycheck and benefits. But after my wife saw my face light up after playing the big stage opening for Keith Urban, she pushed me to leave my job and go for it. It was a massive risk that doesn’t really pay off for a lot of people who try it. But man when it works, it really works.

What was the first piece of music you bought for yourself, and what medium was it on?

The first CD I ever bought myself was Lonestar’s I’m Already There album. Obviously I had CDs and stuff that my parents had bought me before that, but that one was the one I got with my own money from picking watermelons one summer in Columbus, New Mexico.

If you could see any artist in concert, who would it be?

I’ve never seen a Bruno Mars concert. That’s one I would absolutely love to experience. I hear it’s pretty epic.

What TV series have you watched all the way through multiple times?

I’ve watched The Office about three times now. Never gets old. I also kind of hate that I do that because it reminds me that I’ll never be as good as Jim. No man will ever be.

What is one of your favorite song lyrics by another artist and why?

My good friend Shy Carter just dropped an album and the song “The Rest of Us” has a special hook. The lyric goes “thank God for people like you who never give up, on the rest of us.” That song has got some honest songwriting and a great message.

What piece of advice would you give to your younger self?

I would tell my younger self to learn how to play more instruments. I love the creative process of making music and I just wish I could lay down the idea rather than having to hum something to get my idea across.

What is at the top of your career bucket list?

I don’t know that I prioritize one goal over another. Each moment and accomplishment holds its own special place in my heart and I try to live in that moment. Having a long career in music, doing what I love and providing for my family is all I can ask for.

Since we are heading into the holiday season, what is your favorite holiday tradition?

My favorite holiday tradition is having posole Christmas morning. That counts right? Eating? It’s just comfort food and perfect for when the cold weather sets in. I also enjoy that my wife gets our family matching pajamas that we stay in all day. Posole and pajamas. Sounds like a song to be written.