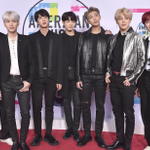 Underwood and Aldean are scheduled to perform their duet “If I Didn’t Love You,” which topped Billboard‘s Country Airplay chart for two weeks, while paying tribute to the country stars’ Southern backgrounds. Chattanooga-born Brown is slated to sing “One Mississippi” at Tennessee State University, an historically Black college.

Lastly, New Edition and New Kids on the Block are returning to the AMAs marquee for the first time in over a decade. The two former boy bands will be sharing the stage for a “Battle of Boston” performance.

ARMY, grab your helmets and dancing boots: BTS is coming to the American Music Awards.

The show announced on Monday (Nov. 8) that the K-pop superstars will hit the main AMAs stage with Houston rapper Megan Thee Stallion for the world TV premiere of their smash “Butter” remix.

Rodrigo, who leads this year’s pack with seven nominations, will make her AMAs debut during the broadcast.

Bad Bunny, a two-time AMA winner, will undoubtedly get the place bouncing with the world premiere TV performance of “Lo Siento BB:/.” Nominated for five awards this year, the rapper and singer last graced the AMAs stage in 2018 alongside J Balvin and 2021 AMAs host Cardi B for a performance of “I Like It.”

BTS’ RM, Jin, Suga, J-Hope, Jimin, V and Jungkook are no strangers to the AMAs. In recent years, the South Korean superstars have nabbed six trophies, and in 2020 performed from their home country. They’re up for more hardware (three awards) this time, including a nomination for artist of the year.

Megan Thee Stallion, meanwhile, also has a hat trick of nominations this year.

As previously reported, Cardi B will make her hosting debut at the 2021 AMAs, set for Sunday, Nov. 21, at 8 p.m. ET/PT on ABC and streaming the following day on Hulu. The show will air globally across a footprint of linear and digital platforms in more than 120 countries and territories. MRC Live & Alternative and Jesse Collins Entertainment are producing.