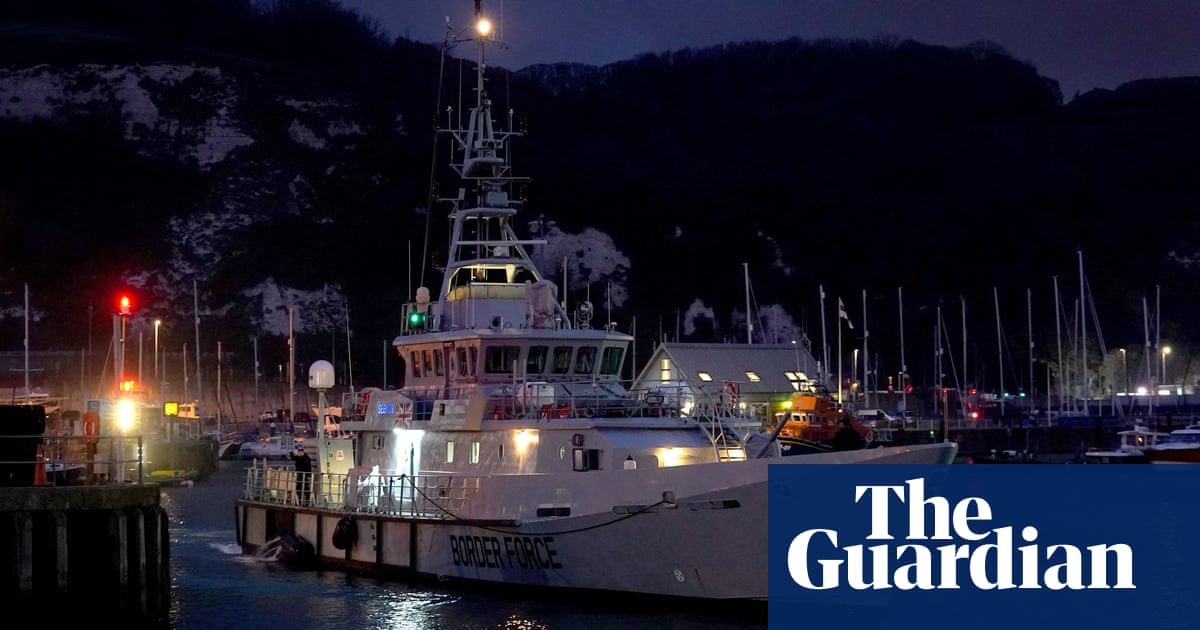 Border Force guards, who the government says will be asked to turn refugee boats in the Channel around, are considering applying for a judicial review to stop the tactic from being used.

Officers from the PCS union have said they are prepared to launch a high court challenge to the lawfulness of Priti Patel’s plans. The home secretary has maintained that the tactic of intercepting and sending back boats to France would be within the law.

Documents from the Home Office seen by the Guardian show that the government’s own lawyers have warned ministers that the tactic could lead to a legal challenge from a union or possible strike action.

It emerged last week that counsel warned the home secretary that the odds of successfully defending a challenge are “less than 30%”.

The number of asylum seekers crossing the English Channel hit a new daily record of 1,185 on Thursday.

Three people were feared lost at sea after two kayaks were found adrift off the coast of Calais on Thursday. There has been a spate of recent deaths and disappearances of those people trying to reach the UK across the Channel.

Kevin Mills, the PCS lead for Border Force, said: “We have examined the possibility of launching a judicial review. PCS is in consultation with its members and a number have raised direct concerns about the pushback tactic – the safety and if it is legal.

“If someone dies, it won’t be Priti Patel taking the body out of the water. And to say that the officers concerned won’t be prosecuted does not help our members’ mental health,” he told the Guardian.

A document circulated within the Home Office in September outlined government lawyers’ concerns that unions could launch a successful challenge if ministers go ahead with “pushback” plans.

“We have commenced the required three weeks of formal consultation with the three relevant Home Office trade unions on the operational proposals,” the document said.

“While consultation requires listening, responding and, where possible, reaching mutual agreement in basic terms we can ultimately proceed without trades union agreement,” the document said.

The document warned that unions could take industrial action, apply for a judicial review or use the Employment Rights Act to challenge the tactic.

“However, there are the potential risks of the trades unions taking strike action or action short of a strike following a ballot and they could also be the source of a legal challenge. They may apply for a judicial review and support individual claims – including under section 44 of Employment Rights Act,” it said.

Enver Solomon, the chief executive of the Refugee Council, said: “The union is right to challenge pushbacks as cruel, dangerous and in conflict with international law. Conservative prime ministers since Winston Churchill have welcomed people, regardless of how they have reached our shores, who through no fault of their own have had to flee for their lives.”

Patel is under increasing pressure from Boris Johnson and Conservative MPs to cut the numbers making the crossing. The home secretary promised to make the route “unviable” in August 2020.

The Guardian first heard of the plans to push back boats in the Channel from Conservative MPs who had meetings with Patel in early September following a surge of crossings.

Days later, the Home Office announced that they aimed to turn around boats, despite warnings from the French authorities, unions and refugee charities that it could endanger lives.

Home Office sources insisted that Border Force guards were being trained to employ the tactic in specific circumstances, but union officials warned that they could envisage few circumstances where it would be viable.

Lucy Moreton, from the Immigration Services Union that also represents Border Force guards, said the plan would never work because France would not engage with it. “This announcement makes it more likely that some could jump into the sea when they are approached to ensure their boat is not turned back,” she said.

At the Conservative party conference in October Patel said she would move forward on the plan to turn back boats after consulting the prime minister.

“Boris [Johnson] and I have worked intensively with every institution with a responsibility to protect our borders. Border Force, the police, the National Crime Agency, maritime experts – and yes, the military – to deliver operational solutions, including new sea tactics, which we are working to implement to turn back the boats,” she said.

Patel also appeared before the House of Lords in October, and insisted that the practice of sending boats back to France would be within the law. Asked by Baroness Shami Chakrabarti if she had received legal advice regarding the pushback of boats. Patel replied: “There is a legal basis for it.”

The Home Office said it does not comment on leaks or legal advice. Dan O’Mahoney, the “clandestine Channel threat commander”, said: “Migrants making these dangerous crossings are putting their lives at risk and it is vital we do everything we can to prevent them and break the business model of the criminal gangs exploiting people.

“As part of our response it is important we have a maritime deterrent in the Channel, and Border Force officers are authorised, trained and stand ready to use safe and legal options to stop these deadly crossings.”