The Guardian view on Bosnia and Herzegovina: past time to take a stand | Editorial 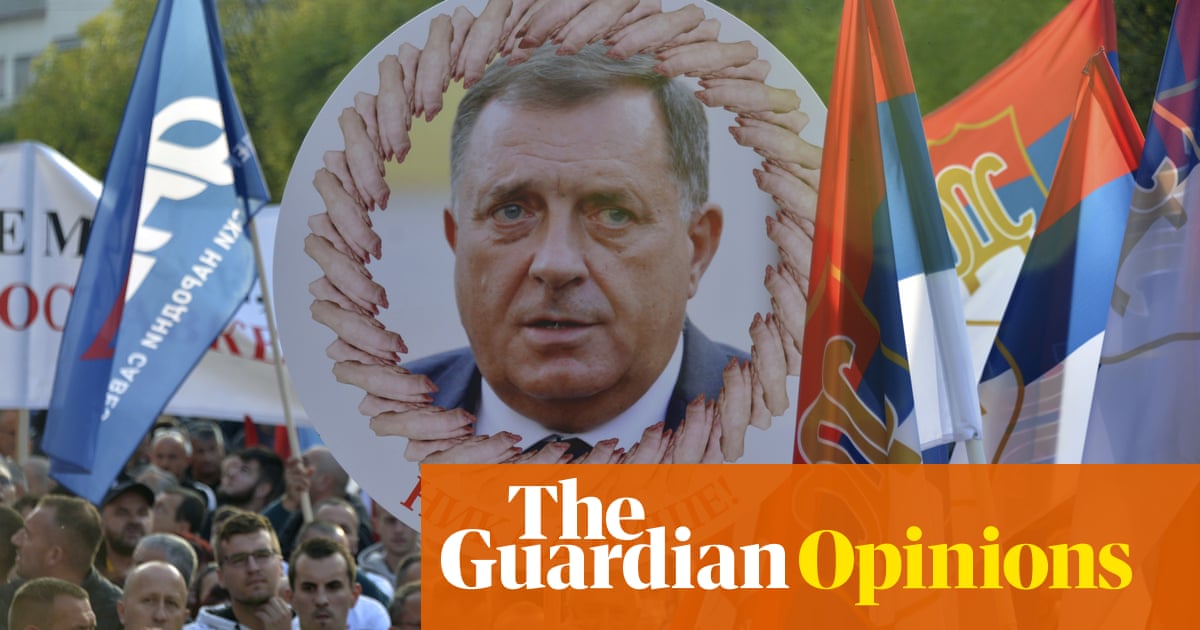 Better late than never? The US and Europe finally show signs of awakening to the dangers facing Bosnia. A crisis with long roots has escalated dramatically, with the international community’s chief representative, Christian Schmidt, warning that the country could soon break apart. He described a “very real” prospect of a return to conflict, 26 years after the Dayton peace accords ended a war that cost 100,000 lives, and the Srebrenica massacre of Muslim men and boys that was the worst atrocity in Europe since the second world war.

Since then, Bosnia has been made up of the Republika Srpska and the Federation of Bosniaks and Croats, with a tripartite presidency composed of one Serb, one Bosniak and one Croat. Milorad Dodik, the genocide-denying leader of the Bosnian Serbs, has pressed for years for them to go their own way. The limited international pushback has emboldened him. In response to the introduction of a genocide denial law by the previous high representative, Mr Dodik is threatening to quit state institutions – including the national armed forces. This would be, as Mr Schmidt noted, secession in all but name. In creating a new Bosnian Serb army, it would also revive the very body responsible for genocide. Mr Dodik has said he would force Bosnian troops out of the Republika Srpska and that, if necessary, his “friends” would back him.

At the start, the high representative used the post’s considerable powers to keep politicians in check. But the role has been systematically weakened. Mr Schmidt was further undermined when references to his position were removed from the renewed mandate of the Eufor peacekeeping force in Bosnia, after Russia made clear it would otherwise veto the Security Council resolution.

The broader context is the death of the European dream. Emmanuel Macron’s rejection of EU enlargement – ignoring warnings of the dangers of reneging on promises to the western Balkans – was a devastating blow, and the lack of coherence and stability in Europe has finished it off. That has left little to offer as an alternative to nationalism. Mr Dodik has found support from Hungary’s Viktor Orbán; Russia and, to a lesser extent, China and even Turkey have a growing hold. Amid political and economic stagnation, many citizens are simply leaving.

Mr Schmidt’s report has pushed the crisis up the agenda. Gabriel Escobar, the envoy for the western Balkans, has just visited; a re-engaged US is crucial, though critics complain it remains too keen to appease. The EU remains largely muted and the more vocal UK can no longer press the case from within. The US sanctioned Mr Dodik in 2017 for obstructing the implementation of the peace agreement; what is needed now are robust sanctions against his circle, cutting off access to European markets and banking. However belatedly, governments should also make explicit their support for Mr Schmidt, and their belief that Mr Dodik is responsible for this crisis. The west should make clear that any attempt at violence would be met by reinforcement of international forces, with Nato doing the job if the EU is unable to, as set out in the Dayton accords. The EU should also ask itself what hope it might offer to Bosnia.

The issue is not only whether the Bosnian Serb leader climbs down, as he has in the past, but how confident he feels in future provocations. That the best case scenario for the country now appears to be a continued, gradual deterioration must be a spur to do better.