Taylor Swift Stuns With 10-Minute Version of ‘All Too Well’ on ‘SNL’: Watch 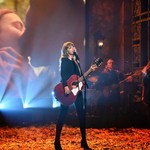 On Friday, the singer-songwriter also released her All Too Well short film, starring Dylan O’Brien (Maze Runner) and Sadie Sink (Stranger Things). Written and directed by Swift, the brief piece portrays a couple whose idyllic romance unexpectedly sours, just like the tortured relationship at the center of the fan-favorite song.

Before taking the stage as the SNL musical guest, Swift joined Pete Davidson for a music video roasting the Please Don’t Destroy comedy trio of Ben Marshall, John Higgins and Martin Herlihy. It all started on a nice note, with Davidson pitching a music video to the guys about how they were all “best friends,” but it took a cruel turn when Davidson declared in the rap parody’s chorus: “All my friends are cool and famous — except these three sad virgins.”

Watch Swift’s “All Too Well” performance on SNL below, and see the full episode on Hulu here. The streaming service is currently offering a 30-day free trial, which you can sign up for here.