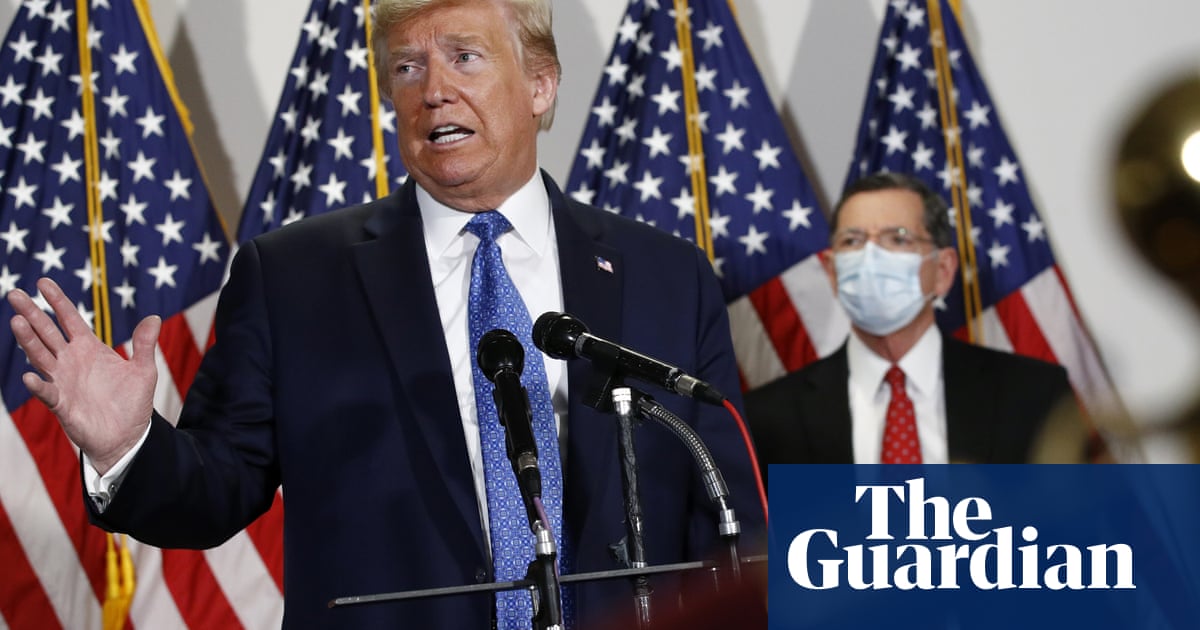 A senior Senate Republican refused four times on Sunday to condemn Donald Trump for defending supporters who chanted “Hang Mike Pence” during the deadly assault on the US Capitol on 6 January.

Trump made the comments about his vice-president, who refused to yield to pressure to overturn Joe Biden’s election victory, in an interview with ABC’s chief Washington correspondent, Jonathan Karl.

John Barrasso of Wyoming, the third-ranking Republican in the Senate, appeared on ABC’s This Week. He was asked: “Can your party tolerate a leader who defends murderous chants against his own vice-president?”

He also said the party was focused on elections and policy debate, not the past.

His host, George Stephanopoulos, said: “So you have no problem with the president saying, ‘Hang Mike Pence’ is common sense?”

“I was with Mike Pence in the Senate chamber during 6 January,” Barrasso said. “And what happened was they quickly got Vice-President Pence out of there, certainly a lot faster than they removed the senators. I believe he was safe the whole time.

“I didn’t hear any of those chants. I don’t believe that he did either. And Vice-President Pence came back into the chamber that night and certified the election.

Stephanopoulous said: “We just played the chants. I’m asking you if you can tolerate the president saying ‘Hang Mike Pence’ is common sense.”

“It’s not common sense,” Barrasso said, before pivoting to Trump’s lie that the election was subject to widespread voter fraud.

“There are issues in every election,” he said. “I voted to certify the election. And what we’ve seen on this election, there are areas that needed to be looked into, like what we saw in Pennsylvania. We all want fair and free elections. That’s where we need to go for the future.”

Stephanopoulos said: “But you’re not going to criticise President Trump for those views?”

Barrasso said: “I don’t agree with President Trump on everything. I agree with him on the policies that have brought us the best economy in my lifetime. And I’m going to continue to support those policies.”

Trump’s dominance of his party and flirtation with another run for the White House has seen critics within the GOP subject to primary challenges, political ostracisation and even death threats.

Anthony Gonzalez of Ohio voted for Trump’s impeachment over the Capitol attack. Like Adam Kinzinger of Illinois, one of only two Republicans on the House select committee investigating 6 January, Gonzalez will retire next year.

He told CNN’s State of the Union he feared Trump was formulating plans for a successful coup in 2024, should he not win the White House outright.

“I think any objective observer would come to this conclusion. That he has evaluated what went wrong on 6 January. Why is it that he wasn’t able to steal the election? Who stood in his way?

“Every single American institution is just run by people. And you need the right people to make the right decision in the most difficult times. He’s going systematically through the country and trying to remove those people and install people who are going to do exactly what he wants them to do, who believe the big lie, who will go along with anything he says.

“I think it’s all pushing towards one of two outcomes. He either wins legitimately, which he may do, or if he if he loses again, he’ll just try to steal it but he’ll try to steal it with his people in those positions. And that’s then the most difficult challenge for our country. It’s the question, do the institutions hold again? Do they hold with a different set of people in place? I hope so, but you can’t guarantee it.”

Gonzalez said he “despised” most Biden policies and would never vote Democratic.

“I see fundamentally a person who shouldn’t be able to hold office again because of what he did around 6 January, but I also see somebody who’s an enormous political loser. I don’t know why anybody who wants to win elections would follow that. I don’t get it ethically. I certainly don’t get it politically. If he’s the nominee again in ’24 I will do everything I personally can to make sure he doesn’t win.

“… 6 January was the line that can’t be crossed. 6 January was an unconstitutional attempt led by the president of the United States to overturn an American election and reinstall himself in power illegitimately. That’s fallen-nation territory, that’s third-world country territory. My family left Cuba to avoid that fate. I will not let it happen here.

“Can I stop him? I have no idea. But I believe as a citizen in this country who loves his country and respects the constitution, that’s my responsibility.”

Trump issued a statement on Sunday, repeating his lies about election fraud and alluding to the indictment on Friday of his former strategist Steve Bannon for contempt of Congress, for ignoring a subpoena from the 6 January committee, and legal jeopardy faced by others including his former chief of staff, Mark Meadows.

“American patriots are not going to allow this subversion of justice to continue,” Trump said, adding: “Our country is going to hell!”