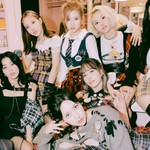 The new full-length features TWICE’s No. 10-charting Global Excl. U.S. single “The Feels,” the act’s first effort entirely in English. The set also features new track “Scientist,” which sees the nine-piece telling their lovers that there’s no need for special equations or chemicals when it comes to true romance.

Released on Nov. 12, Formula of Love: O+T=<3 arrived shortly after Taste of Love: The 10th Mini Album, which dropped in June and hit No. 6 on the Billboard 200 chart.

Placing second on the past week’s tally with 23% of the vote was Swift’s just-released Red (Taylor’s Version), the second in the superstar singer-songwriter’s series of re-recorded albums. Red was originally released in 2012, debuting at No. 1 on the Billboard 200.

See the final results of this week’s new music release poll below.