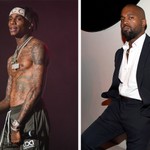 Back in August, Soulja lashed out at West after seemingly getting steamed when he discovered that the final version of Ye’s long-delayed Donda album didn’t feature his verse amid the many features on the nearly two-hour collection. “idk how to feel, Kanye sent me that song ‘remote control’ and I don’t hear my verse on it… hmm f— that n—a,” Soulja tweeted in response to a fan’s query about what the “Crank That” rapper thought about the album.

In a second tweet, Soulja posted what he purported to be a text exchange between himself and Yeezy, captioned, “This n—- Kanye smh. Tell homie dont hit my phone no more.” In the back-and-forth, the men appeared to exchange pleasantries, with West seeming to ask Soulja Boy to come down to the studio to join him.

In the exchange, West seemed to heap praise on Soulja Boy, saying, “I love you bro. You’re a genius. Wanna work with you on the new GAP campaign. And my new album.” The song Soulja said he was reportedly slated to appear on, “Remote Control,” instead features a verse from Young Thug.

At the time, SJB wasn’t the only one steamed about the slight. Chris Brown also didn’t seem too excited. Though he’s listed as a contributor on the album’s 18th track, “New Again,” he reportedly referred to West with the misogynistic slur “whole hoe” in an Instagram Story at the time. According to Complex, in the Story, Brown said “Kanye a whole hoe” just hours after the album’s release, before reportedly deleting that comment and replacing it with “Nah he tweakin’.”

See the exchange below.