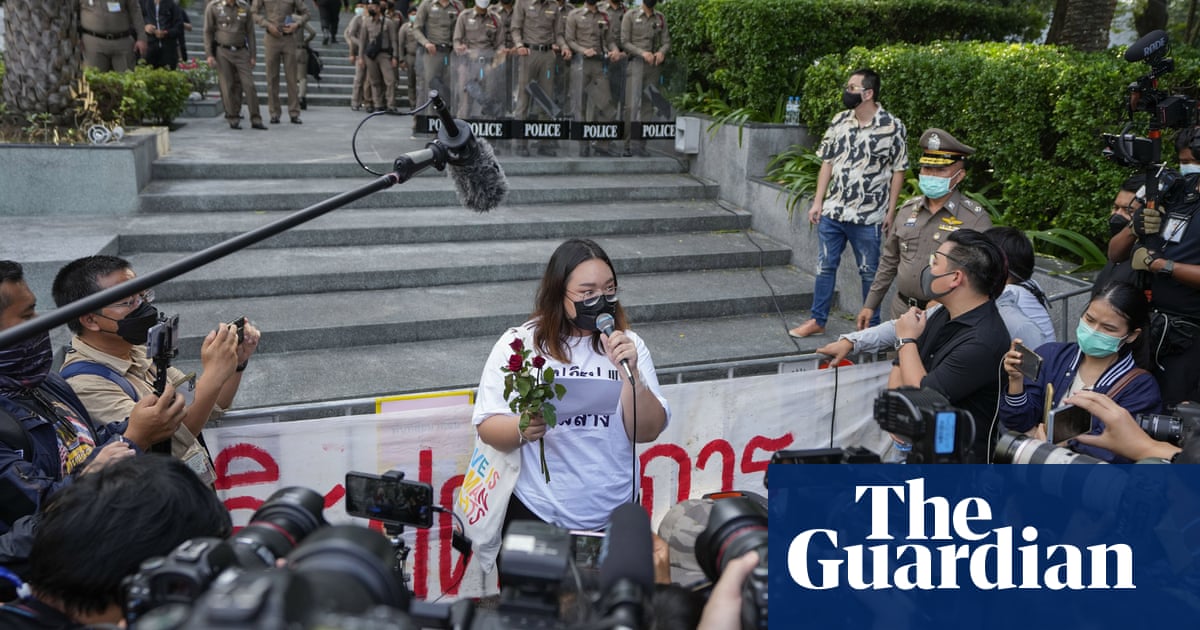 A Thai court’s ruling that protesters’ calls for reform of the monarchy amounted to an attempt to overthrow it has been likened to “a judicial coup”.

Thailand’s political establishment was shocked last year when the leaders of a wave of youthful protests that broke a long-held taboo in calling for curbs on the royal family issued a 10-point list of demands, including that the royal budget be reduced and that the king not interfere with politics.

The constitutional court, ruling in a hearing on the cases of three protest leaders – Panusaya Sithijirawattanakul, 23, Arnon Nampa, 37, and Panupong Jadnok, 24 – said such demands were an “abuse of the rights and freedoms and harmed the state’s security” and ordered an end to them.

Thailand has one of the world’s harshest lese majesty laws, which states that anyone who “defames, insults or threatens the king, queen, heir apparent or regent” can face between three and 15 years in prison. The protesters had also called for that law to be scrapped.

“If we allow the first, second and third defendant and their networks to keep doing this action, it will not be long to lead to the overthrow of the constitutional monarchy,” said the judge, Chiranit Havanond, according to AFP.

Sunai Phasuk, a senior researcher with Human Rights Watch, described the ruling as “essentially a judicial coup” that could pave the way for further legal cases against protesters, who could be accused of treason.

“By asserting that sovereign power belongs to the monarchy not the people, this puts an end to Thailand’s constitutional monarchy rule and replaces it with absolutism,” he said.

The court did not impose a penalty on the three protest leaders, as it was instead ruling on the constitutionality of their demands. All three deny seeking to overthrow the monarchy, according to their lawyer, Krisadang Nutcharut.

“If you actually give the time and opportunity for these young people to elaborate and make their arguments, they would say that these demands for monarchy reform would actually make the monarchy more safe and secure under the democratic regime that we have,” said Krisadang.

Evidence submitted by the defence was not examined by the court, according to Krisadang, who said this had prompted him and Panusaya to walk out of the hearing. Arnon and Panupong are in pre-trial detention over separate charges related to protests and were not permitted to attend the session.

Since last year’s protests, at least 156 people have been charged under the lese majesty law, including 12 minors, the youngest aged 14, according to Thai Lawyers for Human Rights. Twenty-four protesters have been denied bail and remain in pre-trial detention for their political activities.

An online petition recently set up by protest groups to call for an end to lese majesty has attracted more than 210,000 signatures.

Protests have dwindled in number since 2020, partly owing to Covid outbreaks and the increased use of legal charges against activists.

Sunai said it remained to be seen how the protesters would respond to the verdict. “By making peaceful expression impossible, I am worried Thailand is now at a very dangerous juncture as a result of the constitutional court ruling. Instead of stabilising the country, Thailand is heading towards a dangerous chaos,” he said.

On Twitter, FreeYouth, a key protest group, shared an image with the message “Just say it clearly that this country is governed by absolute monarchy”. It added: “The judgment will burn its own system.”