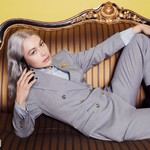 Red (Taylor’s Version), out Friday, is Swift’s remake of her 2012 album of the same name. “Nothing New” is one of the “From the Vault” tracks on the record — songs that were written around the time of the album’s creation but did not ultimately make the cut. (Chris Stapleton and Ed Sheeran are the other featured guests on the new Red vault tracks.)

“I think that she is an incredible businessperson and an incredible writer,” Bridgers continued. “What she’s been able to build just from writing adeptly from a young age is insane.”

Swift has been re-recording her first six albums, which she originally released on Big Machine Records, to gain rights to master recordings of her catalog — a mission she spoke about at length in a 2019 Billboard cover story. The first re-recorded album — Fearless (Taylor’s Version), a remake of her 2008 LP — was released in April and debuted atop the Billboard 200.

“It’s really inspiring for me and a lot of musicians,” Bridgers said of Swift’s re-recording project. “I think a lot of people make a couple of records [and are] like, ‘Oh wow, I hit the top, I’m great now,’ and the fact that she just has always wanted more from the world — like, “No, no, no, f— you, I’m going to make it again, I’m going to make it better, and it’s going to belong to me’ — is the coolest.”