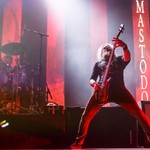 The metal band first ruled the tally in 2014.

Mastodon tops Billboard‘s Hard Rock Albums chart for a third time, as Hushed and Grim debuts at No. 1 on the Nov. 13-dated ranking.

The set bows with 20,000 equivalent album units earned in the Oct. 29-Nov. 4 tracking period, according to MRC Data, with album sales comprising 18,000 units.

Mastodon first crowned Hard Rock Albums with Once More ‘Round the Sun in 2014, followed by Emperor of Sand in 2017.