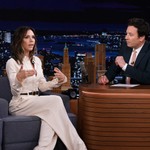 Posh doesn’t coordinate her outfits with David the way they used to, but she chalks it up to growing up and becoming more fashion conscious. “I suppose the more that you get to know the industry, and the older that you get, the less naïve. We didn’t know, we didn’t care. We just had fun and we were like, ‘Hey let’s wear matching leather.’ And we did,” she said.

Victoria and David first met in 1997 while she was still in the Spice Girls — that same year, the Spice Girls’ now-iconic hit, “Wannabe,” was released in the United States and debuted on the Billboard Hot 100 chart at No. 11. The song later climbing to the No. 1 spot on the chart in February 1997. The couple later wed in July 1999, have three children and have been together for over 20 years of marriage.

See Beckham on Fallon below.