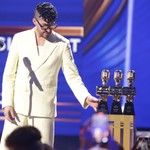 Wearing gold shades and a red polo shirt, Bunny is on brand as a preppy pusher, following the first reveal of his character over the weekend in a clip in which he tries on a series of pastel Polo shirts and plaid pants to the strains of Los Shain’s cover of the Cure’s “Boys Don’t Cry.” In those pics, the Latin Grammy winner has his hair gelled and his dance moves on point in a closet filled with endlessly colorful country club options.

The streamer also posted a series of photos of Bunny’s Paez — a member of Ramon Arellano Felix’s “Narco Juniors” gang — rocking his signature red polo shirt and striped pants in a series of fashion shoot-like poses. The final season of Narcos is set in the 1990s and follows Juárez cartel leader Amado Carrillo Fuentes (José María Yázpik) as the most powerful drug trafficker in the nation’s history battles rival gangs and the encroaching DEA, while Felix sits in jail and new independent cartels rise to power.

The season premiere of Narcos: Mexico is Nov. 5 on Netflix.

Check out the trailer and Insta clips below (Bunny pop up around the 1:38 mark).