Reba McEntire Returns to Country Airplay Chart With Dolly Parton: ‘It’s a Dream Come True to Finally Record With Her’ 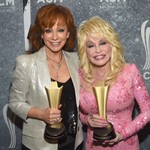 McEntire and Parton’s new take on “Love,” which was produced by Dave Cobb (and written by Sandy Knox and Billy Stritch), is from McEntire’s new triple-album, Revived Remixed Revisited, released Oct. 8 and due on next week’s, Oct. 23-dated charts.

“I’m thrilled with how this new version of ‘Does He Love You’ with Dolly turned out,” McEntire tells Billboard. “It’s a dream come true for me to have finally had the chance to record something with her and then to see the reaction to it, and the video has just been icing on the cake. I can’t believe it’s taken this long to finally get together, but I sure am glad we did.”

Referencing two of the legends’ classic songs, McEntire muses, “Jolene and Fancy would be proud!”

Katie Dean, MCA Nashville senior vp of promotion, explains that, “While [the song is] not an official single, we formulated a plan for maximum radio exposure on ‘Does He Love You’ to spotlight the release of Revived, Remixed and Revisited with the additional goal of charting the song. Because it landed at radio on Friday, we had a very specific list of targets that were essential to our airplay goal. Reba went to work alongside the MCA promotion team by doing a few key interviews, and our partners at country radio stepped up in a huge way for these two country icons.”

McEntire and Parton add their 72nd and 27th respective Country Airplay entries, dating to the chart’s January 1990 inception, and each have now appeared on the ranking in ’90s, 2000s, ’10s and ’20s. McEntire boasts the most appearances among women, and the seventh-most overall. Next up among female artists are Martina McBride (56), Trisha Yearwood (51), Faith Hill (48) and Carrie Underwood (46).