Ontario Lifts Limits on Venues Where Vaccine Proof Is Required 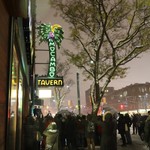 The government said that there had been a limited number of outbreaks in those settings.

“As we continue to see more Ontarians roll up their sleeves with over 22 million doses administered, our government is cautiously lifting capacity limits in select settings where we know proof of vaccination requirements are providing an added layer of protection to Ontarians,” Christine Elliott, Deputy Premier and Minister of Health, said in a statement.

As of Friday, more than 81% of Ontario’s population of people 12 and older was fully vaccinated, according to government figures.

The new rules will benefit major concert venues like Scotiabank Arena in Toronto and Canadian Tire Centre in Ottawa, and they arrive in time for the new seasons of the NHL’s Toronto Maple Leafs and Ottawa Senators games, as well as the NBA’s Toronto Raptors.

But they will not aid struggling music clubs like the Horseshoe, El Mocambo and The Garrison, which are still requiring social distancing limits and dealing with capacity restrictions that make it difficult to operate at a profit and pay performers.

Smaller music venues are limited to how many seats they can fit in their spaces. The Garrison, for example, can only seat 110 people, or 32% of its legal capacity, Shaun Bowring, the venue’s owner, tells Billboard.