Halsey Talks Body Image After Giving Birth: ‘I Will Never Have My Pre-Baby Body Back’ 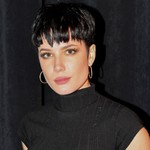 She continued, “The first picture on this slide is days after my baby was already born. A lot of people don’t know that you still look pregnant for a while after. It is still changing and I am letting it. I have no interest in working out right now. I’m too tired and too busy playing with my darling son. With that being said, the body behind all those compliments the other night was wearing a custom tailored outfit and lighted perfectly after much testing, so I could feel good and do my job. I do not want to feed the Illusion that you’re meant to feel and look ‘great’ immediately postpartum. That is not my narrative currently.”

The singer then addressed followers who might be parents in their message, saying that she plans to support them along their parenthood journey. “If you’ve been following me because you’re also a parent and you dig what I’m doing, please know I’m in your corner. I will never have my ‘pre baby body back’ no matter how it changes physically because I have now had a baby! And that has altered me forever; emotionally, spiritually, and physically,” Halsey wrote. “That change is permanent. And I don’t want to go back! But In the spirit of honesty, I’m really tired and not a superhuman and this is really hard. Doing my best to serve my art and my family whilst keeping it all so very real.”

Halsey and boyfriend Alev Aydin welcomed their first child, Ender Ridley, on July 14. The couple tends to keep their relationship private, but the singer announced that she was expecting via Instagram on Jan. 27.

Motherhood has been an inspiring experience for Halsey. In an Instagram post unveiling the cover art for their recent album, If I Can’t Have Love, I Want Power, the singer said the image — which features a painted version of the star sitting on a throne, breast exposed, while holding a baby — “celebrates pregnant and postpartum bodies as something beautiful, to be admired,” while the album as a whole discusses “the joys and horrors of pregnancy and childbirth.” If I Can’t Have Love, I Want Power debuted at No. 2 on the Billboard 200 and hit No. 1 on the Top Album Sales chart.