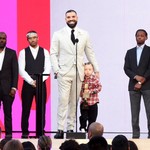 When Drake was honored as artist of the decade at the 2021 Billboard Music Awards earlier this year, he brought his then-three-year-old lad onstage during his acceptance speech.

In an unscripted moment, while the rapper was talking, Adonis had a moment and tried to run away with the trophy. He didn’t manage to steal the award, but he stole the show.

Drake’s latest album Certified Lover Boy blasted to No. 1 on the Billboard 200 chart last month, breaking records in the process.

See the dad-and-son pic below.