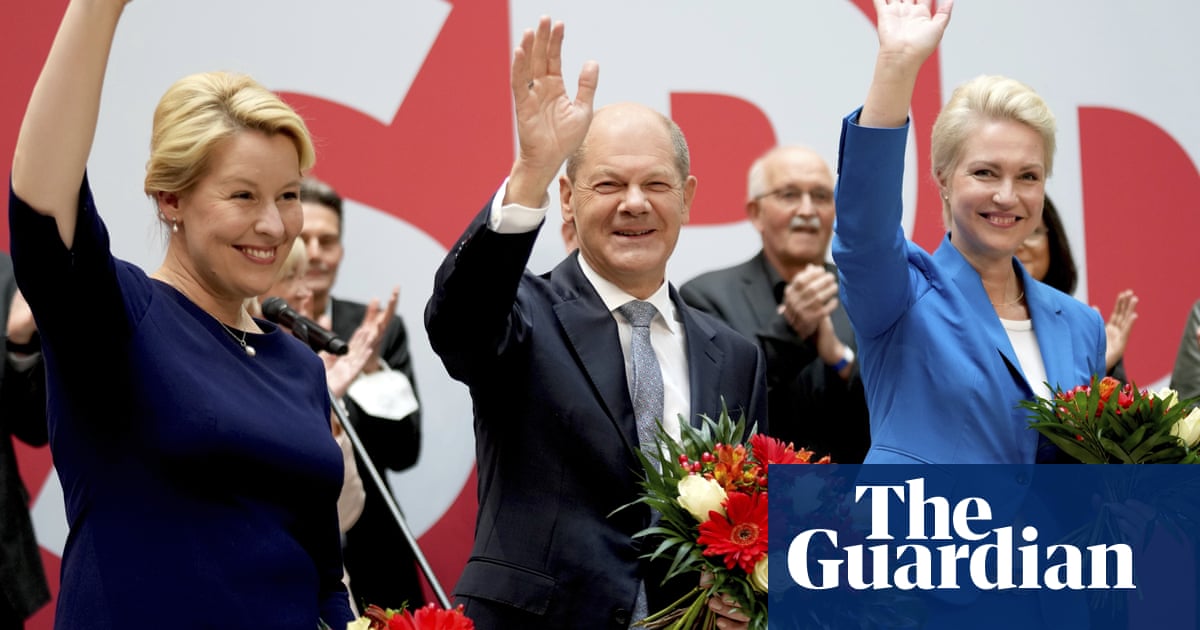 The centre-left contender to fill Angela Merkel’s shoes has announced his intention to forge a “social-ecological-liberal coalition” following Sunday’s knife-edge German national vote, as momentum slips from the outgoing chancellor’s own designated successor.

“The voters have made themselves very clear,” Olaf Scholz of the Social Democratic party (SPD) said at a press conference on Monday morning. He pointed out that his centre-left party, the Greens and the pro-business Free Democratic party (FDP) had all picked up significant numbers of new votes at the election, while the conservative Christian Democratic Union (CDU) suffered a loss in support of almost nine percentage points.

“And that’s why we have a visible mandate that the citizens of this country have formulated,” said Scholz, who is vice-chancellor in the outgoing government.

The Greens and the Free Democrats, who achieved 11.5% and 10.3% of the vote, have agreed to hold exploratory talks with each other before entering negotiations proper, the FDP leader, Christian Lindner, said on Monday.

As well as joining a power-sharing deal with the SPD, nicknamed “traffic light” after the parties’ traditional colours, the Greens and FDP could theoretically lend their support to a so-called “Jamaica coalition” with the CDU, led by its chancellor candidate, Armin Laschet.

As exit polls on Sunday projected the SPD and CDU to be tied in a dead heat, Laschet initially sounded bullish in his determination to lead the next government, saying “we will do everything to form a government”.

But after the SPD’s lead increased as votes were counted and it went 1.6 percentage points ahead of the CDU, which also recorded its lowest-ever share of the vote, Laschet gave a more modest impression the next day, without ceding his claim completely.

While the result of the vote “cannot, must not and won’t satisfy the [Christian Democratic] Union”, the CDU leader said at a press conference, it did not yield a government mandate for either of the largest parties.

Not only Social Democrats question Laschet’s analysis of the result. On Bild newspaper’s own television channel, the tabloid’s commentator Paul Ronzheimer said the Rhinelander gave the impression that “he lives in a different reality”.

Several conservative politicians who had backed the CDU candidate on election night distanced themselves from his boosterish determination on Monday morning.

“Second place cannot be construed to amount to a mandate to form the next government,” tweeted Markus Söder, the Bavarian state premier whom many conservatives had wanted to see run for the top job in Laschet’s stead. At a press conference, the southern German leader talked of a “disappointing result” and a “defeat that cannot be sugarcoated”.

“I think a lot of voters were irritated by what Laschet said on Sunday,” said the political scientist Andrea Römmele on public broadcaster ARD. “I think it’s dawning on them that that wasn’t a particularly smart move”.

In Saxony, where the CDU ceded several constituencies to the far-right Alternative für Deutschland (AfD), the state premier, Michael Kretschmer, described the outcome of the vote as an “earthquake” that did not give his party moral authority to lead the next government.

“At this election the CDU was not the first choice,” Kretschmer told the broadcaster MDR. “There was a clear mood for change, against the CDU.”

The Saxon leader blamed his party’s poor result in the south-eastern region largely on the government handling of the Covid pandemic. Federal structures initially allowed his state to pursue its own course with social distancing rules, for example by ruling out closures of nurseries and primary schools. Later in the pandemic, state authorities were overruled by Merkel’s federal government.

Scholz, the frontrunner to eventually take over Merkel’s keys to the chancellory, said on Sunday evening he was confident there would be a new government by Christmas.

But the pace of coalition talks in the coming weeks will be unhurried and cautious, not least because the last time three German parties entered talks to share power in government, between the CDU, the Greens and the FDP in 2017, the experiment ended in failure.

On Monday, Scholz promised to approach talks in a very pragmatic and “unboastful’” fashion.

Should Scholz be able to convince the Greens and FDP to enter coalition talks with his party first and on exclusive terms, a leisurely pace may also work in his favour. The fragile truce that has persisted among Germany’s conservatives so far is unlikely to survive a protracted period of watching its historical rivals inch their way to power.