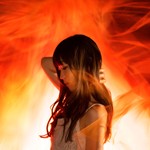 The popular anime has launched a number of recent long-running J-pop hits, including LiSA’s “Homura” (co-written by Kajiura and LiSA) and “Gurenge,” and Aimer’s new numbers are expected to follow suit.

Aimer commented that she’s “really happy and honored” to sing both tracks, and that she’s looking forward to “adding a bit of flair to their story every week, as the excitement builds against the backdrop of the nightlife in the entertainment district.”

“Zankyosanka” and “Asa ga kuru” will be released on Jan. 12, 2022. The entertainment district arc of Demon Slayer: Kimetsu no Yaiba will begin airing in Japan on Dec. 5.