‘Here’s to You, Charlie’: Rolling Stones Start Up First Tour Without Charlie Watts 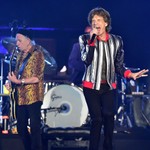 A visual tribute to Watts on the stage’s four massive video walls kicked off the night before the band ripped right into on-point versions of “Street Fighting Man” and “It’s Only Rock ‘N’ Roll (But I Like It),” followed by what could be described as a heart-to-heart between the group’s longest-serving members and the audience, some of whom may have been caught unawares.

“It’s great to be back playin’ a big stage, I tell ya,” said Mick Jagger, flanked by co-founder Keith Richards and longtime member Ronnie Wood. “This is the first show of our tour. It was really quite emotional seeing those pictures of Charlie up on the screen. This is the first tour that we’ve ever done without him so I think all the reaction from you guys and all the things that you’ve said and we’ve heard from you has been really touching. And I really wanted to thank you very much.”

Growing emotional, Jagger added that “we all miss Charlie so much on the stage and off the stage and we’d like to dedicate this tour… to Charlie. So, Here’s to you Charlie!”

With that the band poured on the classics, from a “Tumbling Dice” that featured twin-Telecaster interplay between Richards and Wood, to rollicking versions of “Under My Thumb” and “19th Nervous Breakdown.” Other staples followed, including a ballad break with “Wild Horses” and an inspired “Can’t Always Get What You Want,” which Jagger helped to fill out with some acoustic guitar. Other fan favorites included the loose-in-a-good-way “Start Me Up” and “Jumpin’ Jack Flash,” the Americana classic “Honky Tonk Woman,” disco-tinged “Miss You” and the psych-rock freakout of “Paint It Black.” Richards gave Jagger a breather midway through the gig and fronted his “Happy” and “Slipping Away.”

Filling Watts’ legendary seat this tour is Steve Jordan, who played with a joyful intensity the entire night. (Like his predecessor, he plays with a jazz grip and occasionally skips the hi-hat on the backbeat — a nice bit of synergy.) The band is filled out by longtime touring members Darryl Jones on bass, Chuck Leavell on keys, Tim Riess and Karl Denson handling saxophones and Matt Clifford on multiple instruments. Backing vocals came courtesy of Bernard Fowler and Sasha Allen, who shimmered in a Tina Turner-esque dress while belting “Gimme Shelter,” one of the night’s encores.

Nevermind their combined age clocks in at 229 (MJ 78, KR 77, RW 74), the core trio of the band remain in miraculously good shape, and Jagger’s durable voice — with its wide range from whine-and-snarl to a more delicate touch on ballads — is cracking good. Richards, meanwhile, wore a perma-smile to match his leopard-print shirt, Asics and assorted accoutrements, while Woody bounced around the stage like a performer half his age.

“Cheeky Mick” was another whole vibe throughout the night and at one point the singer told the crowd that gymnast Simone Biles and billionaire Stan Kroenke were in the house. The former, who is on record loving St. Louis’ love-it-or-hate-it version of pizza and therefore is now an honorary St. Louisan, was in fact across the country (in Los Angeles) performing as part of her own tour. The latter, who returned the NFL’s Rams to L.A. after two decades in STL, was also likely in the City of Angels on Sunday, watching his team beat the Buccaneers.

Jagger made sure to drop some local references, joking that he grabbed a BLT at nearby Crown Candy and housed a “frozen concrete” at Ted Drewes before going down the 10-story slide at the City Museum. “That was not the most brilliant idea I ever had,” he quipped. Though he very likely didn’t do any of those things, Jagger did get some sightseeing in when he hit up the Gateway Arch in the days leading up to the show.

Nods to a virus that has upended all daily life — including the Stones’ touring plans — over the last year and a half were scant, though Jagger did give it a mention while teeing up the only new song in the set, “Living In a Ghost Town,” recorded in 2019 but released about a month into the COVID-19 pandemic. “I think we’re gonna do our lockdown song from last year,” he said. “Hope it doesn’t happen again.”

Proof of vaccination or a negative test wasn’t required for entry on Sunday, though face masks were a must at the indoor show (except while eating or drinking). A local hospital system set up shop at the Dome to offer Pfizer and Johnson & Johnson vaccines, a now-regular occurrence at large scale live music events in the COVID era. The area’s vaccination rates stand at 55% fully vaccinated among eligible individuals in St. Louis city and 63% in St. Louis County, according to available CDC data.

Mask requirements vary across the region and new cases are down, however the CDC considers the area to be at high risk of community transmission of the virus.

On Friday, the band posted a video on their socials asking fans who plan to see them this fall to get the shot or at least get tested before coming to see them. “If they want the masks on, put ‘em on — it’s no big deal,” said Richards.

The Stones now head to Charlotte to play Bank Of America Stadium on Sept. 30, followed by Heinz Field in Pittsburgh on Oct. 4. Other cities getting a visit from the band include Nashville, Atlanta, Detroit and Tampa, as well as Los Angeles where the band will play SoFi Stadium.